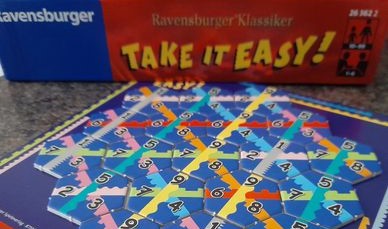 Mini-meeple loves numbers. Mathematics is his favourite subject, and it makes sense to him. I am the oddity in our family. I am a wordsmith. Language is my bag. I struggled through GCSE and AS Level number hell a long time ago, and rely heavily upon my smartphone to save me from any more pain. Having home-schooled for over a year, however, I was thrust into the crazy world of Year 1 maths.

So, to break the tension (mainly inside my own head), I looked to our game shelves for something fun to play that was still linked to numbers, and I spied Take it Easy.

Although it features numbers, the main gameplay in Take it Easy is pattern matching. The mathematical link is definitely there, however, it comes a little later in the scoring.

In the game, everybody has their own player board and set of 27 hexagonal tiles. Each tile depicts three intersecting lines – differentiated by colour, (subtle but different pattern), and number, but the board has space for 19 tiles total. The object of the game is to try and make as many unbroken matching lines as possible.

And tile selection is carried out in bingo style turns. One player is nominated as the caller for the entire game. Their tiles remain face down, whereas everybody else’s sets are laid out face up.

So, on each turn, the caller picks a tile at random, flips it over, and announces/shows which tile it is (e.g. 5/6/8). Everybody (including the caller) then has to choose where to place that tile on their own board. There is no adjacency rule restriction – it can go anywhere within the available space, and everybody has an identical set of tiles. Eventually, working from left to right, there will be 5 complete columns on each board comprising three, four, five, four, and three tiles.

The process starts fairly easily as your board is wide open. Here is where you strategise. Are you going to risk trying to form a long column of 9s down the centre, or are you going to spread risk by going for smaller columns? With only 19 tiles out of a total 27 to appear, some are never going to show up……

Then, as the available space gets smaller, tough decisions have to be made. Scoring sacrifices. Because, whilst the caller may have announced a 9 tile that will help you complete that coveted central column, you may have to break the other two lines forming diagonally behind it. Both of which were shaping up to have juicy point potential!. And this is where cogs start turning. Fast multiplication inside heads to work out the least-worst option available to them. See? Told you it was educational! 😉

Take it to the Bank!

Once the last tile is called and placed (yep, you have to. I won’t lie. It HURTS when you see a carefully planned line shatter on the last turn!), scoring begins.

And here is where the mathematical element of this game really shines. Because each line is worth the number on the completed line multiplied by the number of tiles within it.

So a central column with an unbroken line of 9s will score 45 (9 x 5 tiles). By contrast, if you have a completed central column where 1s run from top to bottom, you will only score 5 (1 x 5).

Once everybody has added up each of their completed lines and totalled them, the winner is the player with the most points.

Take it to the Max!

This game sounds simple. Technically, it is simple. But it hurts my brain in the best possible way. Battling luck of the draw with only strategy to save me is close to the centre of my favourite game circle.

My husband and I are extremely competitive in Take it Easy, primarily because there is no way to meddle with each other’s boards within the multiplayer solitaire gameplay. But we also love playing with Mini-meeple, and sometimes include some additional grown up restrictions (e.g. 9s must be placed in the central column). Often, however, they aren’t needed to level the playing field as Mini-meeple can definitely hold his own here now.

I won’t deny that this game triggers my AP; as the game goes on, my turns take longer and longer. Particularly where I know I have to change strategy because the tiles are not coming out in my favour!  But, Mini-meeple doesn’t let me cogitate forever. His excitement about picking the next tile snaps me out of pause. And for those worried about downtime in what should be a short game, a timer is always a possible option. The components are also only cardboard (thick tiles but thinner boards), which means that they could struggle with repeated plays – the corners of some of our tiles are looking a little fluffy.

But that is, I suppose, a testament to how much Mini-meeple loves this game. He is always the caller (obviously!) as he can apparently uses his super lenses” to see through the tiles! (If that is true, then all I can say is that he must have a serious vendetta against me as the tiles I want always come up in precisely the wrong order! Haha). At only 5, he understood the simple rules and objective from the first game.

And, looking at his completed boards, it is easy to see how he is progressing. He now ponders a little before placing, concentrating hard on completing some longer columns which he knows will score him more points, as well as factoring in the effects on the intersecting lines. He also loves adding up everyone’s scores at the end. In fact, I think he might like that bit the best!

And as a parent, a thinky, satisfying game that encourages our child to visually recognise patterns, weigh up consequential decisions, and practice his number skills, is always going to get a grade A from me!