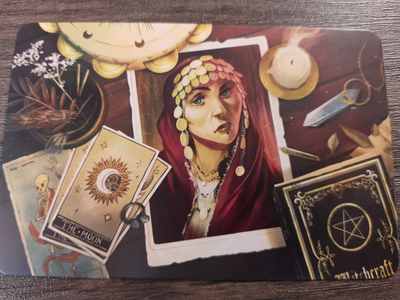 Overview of the game

You are a merry band of psychics who have come to visit the funfair and try to solve the mystery of a most recent murder. Who is the murder suspect and who may be exonerated? In which location did the fateful incident occur? Does this sound a little familiar? Set in a circus fairground, this is the modern hobbyist equivalent to our family favourite of Cluedo.

Mysterium Park is the 2020 sister game to the 2015 hit from Oleksandr Nevskiy and Oleg Sidorenko, and published by Libellud. This new game is significantly more streamlined than its older sister. The gameplay is simplified and streamlined in a way that doesn’t detract from any of the theme of the original.

In the Dark Dark Funfair, One Director Was Killed

During this co-operative game, one player will play as the ghost who was unceremoniously off-ed by one of their fellow circus troupe members. This player will play the games-master and will run the show, trying to get their fellow gamers to guess what their cryptic clues really mean. The other players are the psychics who are trying to solve the riddle of this grizzly crime.

Mysterium park plays 2-5 players and plays in 20-40 minutes, not the oddly specific 26 minutes printed on the box. The more discussion there is between the psychic players, the longer the game will take. But this is not a game to be rushed, this is a game to mull over from the sofa, trying to tap into the brain of the ghost player. What can they see in this picture? Does this spider in a hat represent the dodgem cars or are they trying to suggest the dressing room?

I am a scientist and so is my partner, so I was a little concerned that this game would be a bit too artsy and wouldn’t go over well. I’m one of those scientists that is the exception that proves the rule, I am really into crafts and art. My partner, however, is very logical in the way his brain works, so I was concerned this wouldn’t have been a tangible enough game for him to enjoy. Thankfully, I was proven wrong.

The component quality and the artwork standard is really high. Libellud have pulled out all the stops to ensure that the coloured crystal ball player pieces feel great in hand and look perfect on the table. I am a sucker for great art, and although not perhaps in the same league for me as Abyss or Everdell, the artwork in Mysterium Park still packs a punch. The links tend to be shapes or overarching colours and themes. You need to think like the ghost thinks, so the better you know your fellow players, the easier the game will be.

Building Teams, Solving One Murder at a Time

I have played a version of this game online through a few people’s Instagram stories, and when I heard that this game was much quicker to set up than mysterium, I was all in. I bought it as soon as it was released, and I was really happy with my choice. This game is excellent over video call, and in these weird times that is a huge major plus for me.

We have got mileage out of this game with friends, but it has been most successful playing it with work. I have run a slightly simplified version of this game successfully with groups of 30+ non-gaming work colleagues and it has gone down a storm.Which is lucky as I only started there six months ago, so it was a bit of a leap of faith showing my true gaming colours only two months into the job to the entire UK network!

Thankfully it was so well received that they asked me to do three more sessions. So that is over 60 more recommendations on top of my own! To simplify the game, I did away with certain people having to guess specific clues and instead I just got the whole group working together to decipher the visions. Some people were more into it than others, but it was enjoyed by all. I now am known as the Board Game Queen, a crown I wear with pride as I dish out recommendations to my colleagues!

There isn’t much to dislike about this game if I am honest. The replayability factor is high, the artwork and components are top quality and it is a good break. I guess the only thing is that the game play is kind of abstract so if you want a heavy game filled with logic then this isn’t it. But you also shouldn’t be this far down the review if you only wanted a heavy euro…

I think it is safe to say that I would recommend Mysterium Park to almost anyone, and I would thoroughly recommend this over the original. It is more straightforward and sleeker in every way. I also believe it is cheaper and takes up less shelf space!