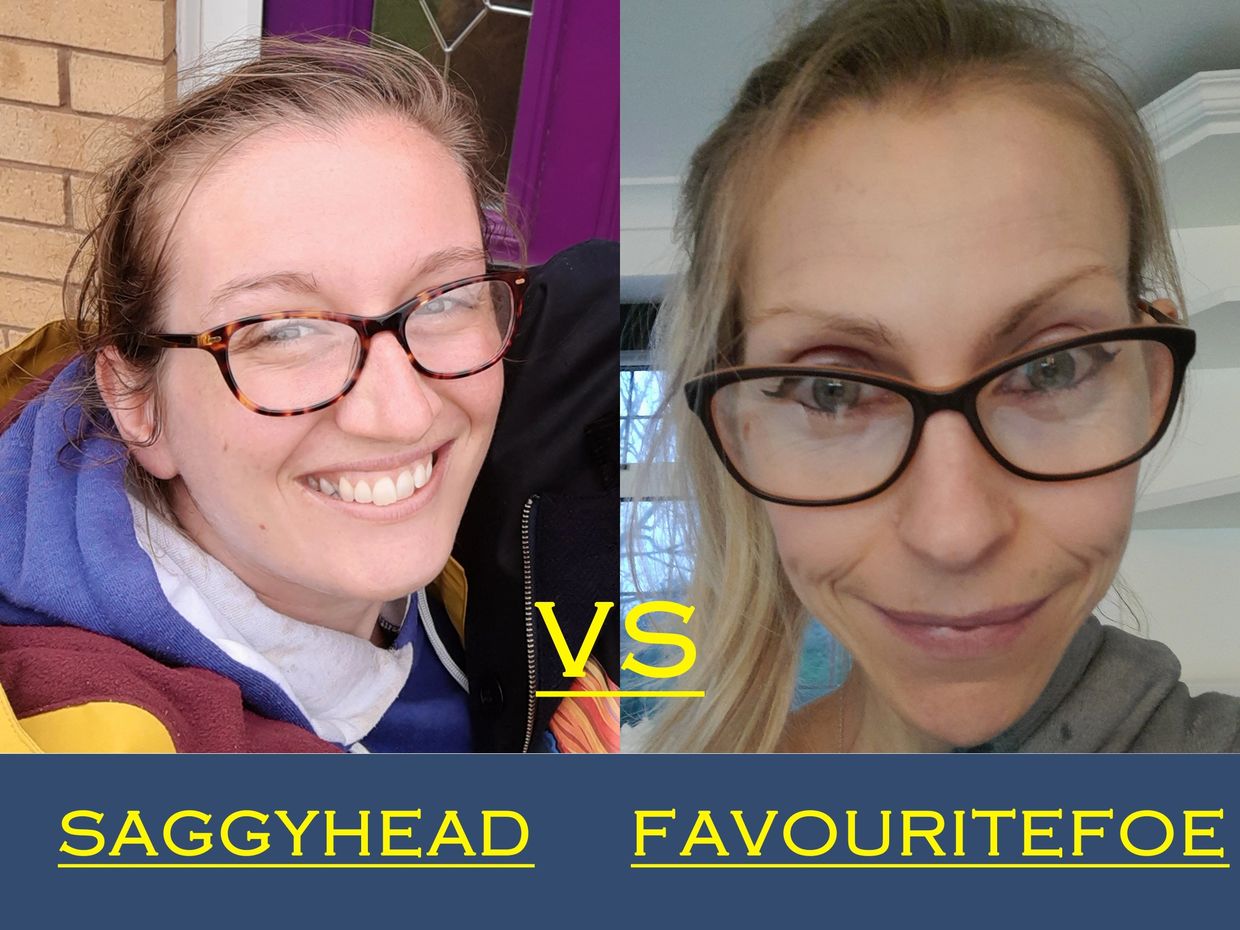 Ok, Saggyhead, the stakes have just got higher. I am going to open my shelves and my heart to you with this little box of blazing brilliance.  You see, I fell for Railroad Ink Blazing Red Edition early into my gaming journey. And, as with all love stories of old, sentimentality, nostalgia, and cardboard-goggles are going to steer my affection. So be gentle with it……….

Heavyweight: Favouritefoe aka “the spaghetti junction”

Light flyweight: Saggyhead aka “the Autobahn”

Favouritefoe: Now, I will be the first to admit that the new #RRInk Challenge Editions (Lush Green and Shining Yellow) are next level. But, I don’t think I would have been as instantaneously infatuated as I am without having been wooed by their sophisticated sibling first.

And I have an inkling that the lovely feelings you’re having for Lush Green might be the for the same reason, Saggy. Because, by some twist of shipping fate, having got you all hot under the collar for Blazing Red after only a few plays, you went and bought the green guapo before my Kickstarter pledge had even fulfilled! And, whether you like it or not, I am putting that super speedy purchase down to the fiery feistiness of the original! 😉

So, Railroad Ink Blazing Red Edition is a roll and write game. As a massive fan of the ever expanding genre, it got under my skin from the first play. The magnetic catch on the box that clicks with a satisfying sound. Dry wipe boards that need no DIY lamination to preserve their longevity. Symbolic dice that tease you with their stations, and punish you with their fly-overs. It all works together to form a brilliant little thinky, spatial puzzle about highways and railways.

But, whilst the length of each of your longest road and rail are valuable in terms of points, they are actually just the means to a victorious end. For the really meaty scores in this game come from using those straights and bends to link up as many exits as possible. And, if you are like me, this little nugget of knowledge will become a sweet little secret kept between you and the game.

So, in every round of the seven comprising the base game, you will roll four white dice showing a combination of roads and rails. Restricted to drawing onto existing connections or out of new exits,  Blazing Red very quickly becomes a game of trade-offs. You won’t be able to connect into every exit, so you have to pick your targets. But of course, lady luck might not (read will not!) shine upon you each round.

You will be inevitably left with open ends that threaten to inflict negative marking if you don’t change your strategy and loop those connections back into something. The dice you want will always be in the subsequent round – guaranteed. And the frustration and flutteriness this inflicts is fantastic. There are three chances to mitigate some of the effects by using bonus crossroads/rail combinations during the game. But don’t be fooled by their tempting looks. With four separate ends to deal with, they can often cause as many problems as they solve.

The expansions in Blazing Red are piquant little additions which bring a fieriness to the base gameplay. And, whilst meteors can (and will) destroy your roads and rails, they will occasionally soothe your broken soul by awarding points for releasing valuable ores. Similarly, volcanoes can punish you by leaving open lava lakes around your board, but will tempt you back with volcanic bonus points. Which all sounds quite reasonable (ok, well at least manageable) until you realise that they shorten the game to only 6 rounds. Plus you still need to connect into as many exits as possible. Which means you still need to be going loopy for tracks and tarmac but on a smaller scale!

I confess that I was enraptured by this little game from my first outing. A multiplayer solitaire that made (and still makes) me laugh, cry, and squeal with equal amounts of pleasure and pain.

Granted, solo mode is simply a BYOS (the Challenge edition massively improves this!), and there is no way to meddle with your opponents, which are always keenly sought after in our house. But, Blazing Red is a game that has soothed me on loud days and got me all fired up on others. It is also super easy to play over video call, as well as portable. Pus, with just one set, you can now play with an infinite number of people (thanks to the official release of PDF PnP boards during the pandemic last year).

I am purposefully trying to avoid too many comparisons with the new Challenge Editions as that would be unfair to this little beauty. In reality, the designers have taken the simple elegance of Blazing Red (or its cute cousin, Deep Blue), and added a lot of extra exciting elements and expansions. In fact, Lush Green and Shining Yellow have almost become Inception like as you delve into challenge-inside a challenge-inside a challenge type gameplay. Knowing what to focus on in order to make the most of the bonus points and combo-actions on offer becomes the order of the day when playing the new colourful iterations.

For me, however, the success and breadth of the new Challenge Editions unequivocally derives from Blazing Red and Deep Blue. And for that reason, my little box of red delights will always get a 9 out of 10.

Ok, so over to you now, Saggy. In the vein of that well-known game of Snog-Marry-Avoid, are you cruising for a quick kiss, committing long term, or kicking Blazing Red to the kerb?

Saggyhead: Railroad Ink is unassuming from the outside, and although I had seen a few completed boards, I had no real idea how it worked. Luckily, this was a speedy “teach” at our board-game-bonanza recently. Even later on at night and after learning a lot of new games in quick succession, MJ and I still found it pretty straightforward to pick up this puzzle of building rails and roads.

The very base game (which is the same across the Blazing Red and Deep Blue boxes) pits you against the lords of the dice. I love roll and write games where you need to work with what lady luck gives you. The skill at becoming good with these games is making the best out of the dross that the dice often hand you, which I really enjoy. I like the fact that even though you are all given the same dice rolls to work with each round, no two boards will look anything like each other.

After the initial game, Railroad Ink went straight onto my wish list. As it happens, our FLGS got their shipment in not long after this, and MJ snapped up the Lush Green edition before I even realised. He does well at these kinds of crunchy train games. Similarly with Metro X, he seemed to hit the ground sprinting unlike myself who stumbled and took a few strides to even remember what running was again. Now after more than twenty plays of Metro X, I can hold my own, but there were a LOT of losses chalked up against my name before I wangled my first win.

We took this out in the wild the other week, and took it to the park. The box is small enough to fit into our picnic basket, so for us it is perfect for taking with a flask of coffee and some snacks to the park on a nice day. If you remove the insert from the box, you have the perfect dice tray too. My only gripe is that the pens that come with the game are not great. SO, after ten to twenty plays, the boards get all grey and need a good clean.

Base Railroad Ink a speedy roll and write that does have some tricky decisions that offer some AP, but not to the point of being debilitating. Once I had played that first game and understood the scoring more, I changed up my strategy a little and focused more on getting those exits linked to score better.

There is definitely room in this game to grow, and I would describe this as a home run by FavouriteFoe! Just like with Metro X, we have introduced this game to our train-game-mad-new-parent-pals, and just like Metro X, it is another huge hit. I am therefore giving it the Saggy Score 8.5/10 with extra points awarded as it can be played remotely with pictures of the dice, as well as on the sofa whilst the baby sleeps on their lap too!

Toot toot! I had a feeling Railroad Ink would be up Saggyhead’s street, and thankfully it was! Another minimal 0.5 point differential, but what is a mere half point between friends (particularly when scoring comfortably inside the top quadrant!)?!

As we approach the end of the first half of the year and the series, I’m pleased to say there haven’t been any massive mistakes in terms of predicting gaming likes to date. But, with another 6 rounds to go, and gaming tastes (supposedly!) ever evolving, never say never!

Stay tuned for #Round 6 to see what Saggyhead has in store for me in July!